Become a Member of

I simply cannot tell you how much I enjoy your videos, your teaching techniques and you personality. By far the absolute best guitar web site.
- William M. 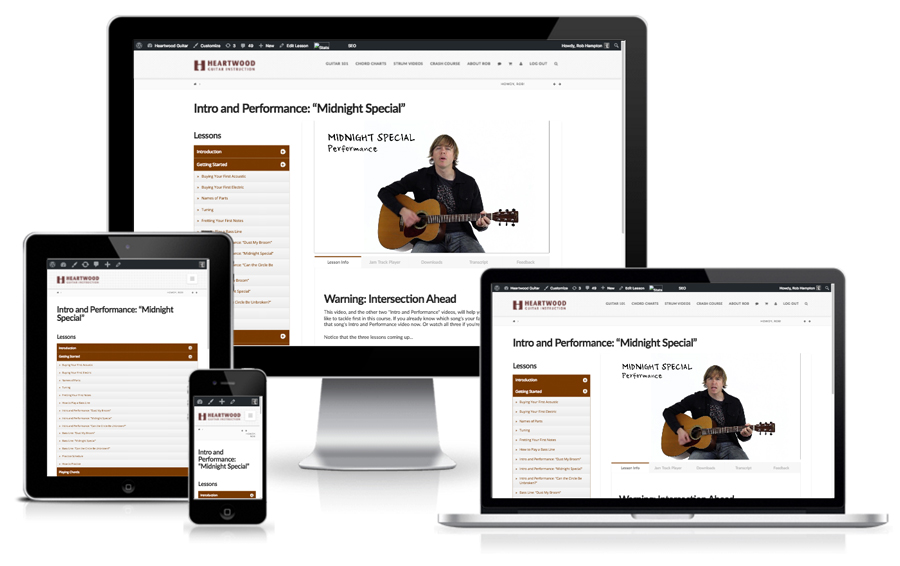 If you'll join my mailing list, I'll let you save all 650 of my chord charts to your computer.

Success! Now check your email to download your charts.

My best guitar instruction articles, videos, and tools, tailored to your skill level.

They’re accurate and way more useful than most, including details like how long to play each chord and what strum pattern to use. There are more than 600 on my site and they’re all free. Help yourself—and learn more about how to read them. GO

It's incredibly rewarding spreading the joy of music. And yes, you can make good money. Here's my guide to running a successful guitar teaching business.

20 classic, not-too-hard songs your friends and family will love.

This chart will look wacky unless you
rotate your phone

How to Read My Chord Charts


The format I use for writing most of the music I teach is a variation on what are commonly called "chord charts": Lyrics with the chord names written above them at the approximate point the chord changes.

This works fine for rhythmically simple songs. But when chords change at unpredictable times, I include some more information.

Number of Measures in Parentheses

In the following example, from Norah Jones' "Be Here to Love Me", the "(2)" means "play A for two measures".  If there's no number in parentheses next to a chord, just play it for one measure.

During instrumental parts of a song, I'll often "dash it out". This example is the intro to Green Day's "Boulevard of Broken Dreams":

Each slash mark "/" marks the beginning of a new measure of music. A chord name represents the first beat of that chord, and dash marks "-" represent more beats of the same chord. So in the example, you play each of the chords for four beats. The "x2" means you play the whole progression twice.

Here's a slightly more complicated example, from the chorus of The Long Winters' "Shapes":

Sometimes you'll find chords in parentheses.  This is something I made up to show that you're anticipating.  Anticipating means playing something before you'd expect--usually an eighth-note early.  My simple way of dashing out music simply isn't nuanced enough to show chord changes happening on offbeats, hence the parentheses.

If you're a beginner, I encourage you to check out the popular lesson on my blog, Strumming 101: How to Strum the Guitar.  It has videos showing each step of the process, and it'll have you strumming correctly in about 15 minutes. But here's a quick explanation of how I write out strum patterns if you already know how to strum.

I usually pencil strum patterns at the the top of my students' music when I'm teaching them a song. But lately I've been typing them so that all the rest of you can learn the strums too. Strum patterns look something like this:

The lower line shows the beats of a measure. The upper line shows when to strum: "D" means strum down, "U" means strum up, and "B" means hit the bass note in the chord (the lowest-pitched root note).  Remember to keep that right arm moving in a consistent up-down motion. Sometimes you're strumming the strings, sometimes your pick is passing over them, but the arm keeps moving.

By the way, that example is what I call the "Folk Strum". It's used in tons of songs (not just folk songs), so if you just see "Folk Strum" at the top of a sheet of music, now you know what to play.

You also might encounter a "B", "X", "M", or "d"above the beats.  "B" means just pick the bass string, which is the lowest-pitched string in the chord. "X" signifies the dreaded "scratch" strum, which is hard to teach in person and harder to describe in writing.  Basically, the karate-chop part of your hand lands solidly on the strings as your pick simultaneously rakes the strings, creating a percussive "whack!"  It helps if you make an OK sign with your strumming hand.  An "M" just means mute--let your hand come down onto the strings instead of strumming them.  A mute can be used instead of a "scratch" strum if necessary. And "d" means a quiet down-strum.

Many of the songs I've posted on my website use what I call Nanocharts (nano = small).  They're the quickest, most compact chord chart known to humanity...and I invented them.  The royalties should be rolling in any day now.

Here's what a Nanochart looks like for the A chord:

The bottom line shows you where you fret each string, 6th string through 1st when reading left to right.  So in the example above, the "x" means to mute or avoid the 6th string.  "0" means open, and those three "2's" mean to fret the fourth, third, and second strings on the 2nd fret.

The top line tells you which fingers to use--the finger number (1st is index, 2nd is middle, T is thumb, etc.) is written above the string it frets.

When chords are up on the tenth fret and above, I type every other fret number in bold for easier reading.  I know, it's ugly....

Here's a good article on how to read tablature, the system of writing guitar music using six lines to represent the six strings, and numbers written on the lines to show you where to fret: How to read tab


This file is the author's own work and represents his interpretation of this song. It's intended solely for private study, scholarship or research.