I teach kids as young as three years old to play guitar. One of the keys to teaching really little kids, besides knowing how to spontaneously burp, wiggle your ears, and listen to that orange/banana knock-knock joke 3,000 times without going AWOL, is choosing the right material.

Kids this young can barely pick their own nose, so there’s no way I’m going to try to get them to fret chords. Instead, I teach them a lot of melodies and bass lines on either the first or sixth strings (the easiest ones to pick).

By the way, I have lots more ideas for teaching kids guitar in my handbook for guitar teachers.

Riffs and Melodies On One String

Smoke on the Water
Deep Purple
“Smoke on the Water” is God’s gift to guitar teachers. I believe it’s listed in the Guinness Book of World Records as The Easiest Cool Riff Ever. Normally played on the 3rd and 4th strings, I transposed to the 6th string to make it easier.

The “Riffs and Melodies On One String” are all available in one Guitar Pro file here. Don’t have Guitar Pro yet? Learn more.

Mary Had a Little Lamb
I promised myself I’d never teach this song, until I was in a pinch during a lesson with a 5-year-old and played this for her. Her look of delight at recognizing the melody cured me of any prejudice I had against this cute children’s song.

Louie, Louie
The Kingsmen
If a child’s dying to learn a particular song, I’ll often figure out a way to play the bass line to the song on the 6th string of the guitar. Here’s “Louie, Louie,” still recognizable because of its distinctive rhythm.

For What it’s Worth
Buffalo Springfield
This is my all-time favorite beginner’s song. The whole thing can be played with just two chords, E and A, if you skip the C and D in the chorus. I have kids learn both the bass line for the song, simply playing quarter notes, and a fretted version of the harmonics that are played during the intro. Once they learn harmonics, they can play the real thing (12th fret harmonic, then 7th fret harmonic). What’s really cool is when I get a couple kids to play the part together. Here’s a video of Emma, Axel, and Conner rocking out with me and some other students at one of the Coffee Shop Jams. Just wish their guitars were turned up higher…grr…

If a child (or a total-beginner adult) wants to sing and play at the same time, I distill songs to their most simple form: Their bass line, played on the 6th string. Any song can be simplified this way. You just have the guitarist play the root note of each chord in a steady rhythm (usually quarter notes or eighth notes). Music is easier to read if you identify the 6th string fret number instead of the note name (A, B, C#, etc.)

Note that several of my young students have…shall we say…non-standard tastes. I wouldn’t necessarily recommend some of these songs to kids, but if they request them, here they are.

Want to learn this technique in-depth, and get my 41 charts converted to this format for easy reading? Check out my article 'How to Teach a Kid Guitar and Stay Out of Rehab' on my site for music teachers, GreatestGig.com.

Once kids learn how to arch their fingers and gain some strength and coordination, they graduate to playing chords using my finest invention: The String Mute 4000. This state-of-the-art device employs military-grade hook-and-loop adhesive to minimize sonic vibritization.

Yep, it’s just a little square of Velcro, cut from a long strip I bought at a craft store. The “hook” side had an adhesive backing, which was a bummer until I realized I could stick my business card on it. 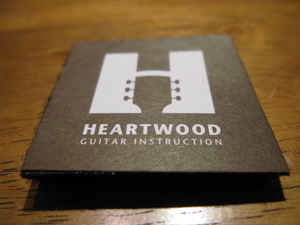 Get that edge lined up between the 3rd and 4th strings. Kids will need help with this.

Here are two great one-chord songs that kids can sing while strumming a G chord using the string mute. Just Google ’em to find the lyrics:

Are You Sleeping, Brother John?
Row, Row, Row Your Boat

Here’s a song from Peter Pan that sounds lovely sung over the C chord:

And once they get good at these 1-chord songs, they can graduate to some songs that just use C and G7:

OK, those songs should get ’em rolling! Remember that young kids have the attention span of hummingbirds, so if you’ve gotten them to focus on a song for at least two minutes, you’ve hit a home run.