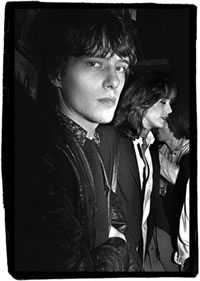 Looking for a new perspective on learning the guitar? Richard Lloyd (of the 70’s punk band Television) has a great set of lessons and essays on his site, including a fascinating explanation of why the guitar is such a pain to tune. He suggests a tuning technique that I’ve started using with great success. If you’ve got a good ear for tuning, try this:

Voila! Strum the guitar. It should sound considerably more pleasing.

The site also features some guitar lessons designed to build motor skill (i.e. finger exercises) and, occasionally, make you feel like a spineless lemming (i.e. lots of ranting and raving about the evils of imitating other musicians). So what if I want to be able to play “Little Wing” note for note? Still, it’s a sweet site.